Claiming horse trainers are realists, as are their owners. Claiming horses don’t ship on jet aircraft, don’t attract a crowd in the paddock and, chances are, if they usually run for a $25,000 tag, they have no shot in a $150,000 race. That all changed with this year’s inaugural running of the Claiming Crown.

Jointly sponsored by the National HBPA and the Thoroughbred Owners and Breeders Association (TOBA), the six race event was held at Canterbury Park on August 7, 1999. For participants and racing fans alike, the Claiming Crown proved an unqualified success.

The Claiming Crown concept was the brainchild of former TOBA President Drew Couto, who originally shopped the idea as part of a proposed recovery of the racing program at Birmingham Racecourse. He was contacted by Canterbury Park President and General Manager Randy Sampson last fall, and negotiations to hold the first Claiming Crown at Canterbury Park began in earnest. To secure the Claiming Crown, the Minnesota racetrack was willing to make significant sacrifices, revamping its stakes schedule and contributing some $300,000 to the purses in addition to another $200,000 contributed by the Minnesota HBPA through cuts in the race meet’s purse structure. On January 28, a press conference was held at Gulfstream Park announcing the formation of the Claiming Crown.

Canterbury Park will host the Claiming Crown for its first three runnings and six times in its first ten years. Based on results from this year’s contests, a more neutral site could not have been chosen. The winners shipped from Prairie Meadows, Monmouth Park, Penn National, Hollywood Park, Churchill Downs, and Lone Star Park, with some of the locally-based runners also giving very good account of themselves. The fairly humid day commenced with a fast track and temperatures in the low eighties. 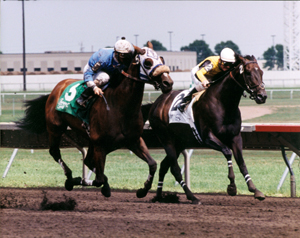 The day started with a familiar face in the winner’s circle as the Don Von Hemel trainee A Point Well Made edged clear of Unruly Zeal and Dixie Banjo to take the Claiming Crown Iron Horse. Canterbury regular Derek Bell piloted the Fred Hooper-bred son of Copelan to 1 1/2-length win, completing the 1 1/16-mile event in 1:45.65. Hawthorne shipper Higher Desire, part of the favored entry, closed well to finish second, a head in front of locally-based Unruly Zeal. Von Hemel owns the winner in partnership with Rash Barrett. A Point Well Made returned $27.80 as the sixth choice in the wagering. The winner’s share of the purse was $27,500. 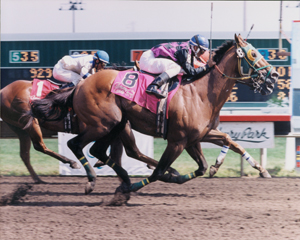 The first of several tight photos on the day was landed by Pioneer Spirit when he edged Canterbury-based Satchmo in a head-bobbing finish to capture the Express. Satchmo finished three-quarters of a length in front of pacesetting Exclusive Example, with the six furlong race timed in 1:10.45. Willie Martinez rode the Monmouth Park shipper for trainer Keith Sirota, who claimed the winner at Hialeah in May for $10,000. The Maryland-bred son of Quiet American is owned by Stephen Richardson and was nominated on the last day of eligibility after earning his trip with a close second in an allowance contest on July 16. Pioneer Spirit returned $3.80 as the odds-on favorite while capturing the $33,000 winner’s share. 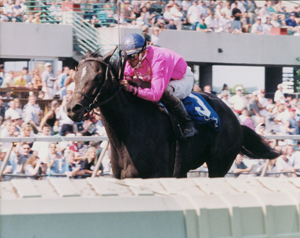 You’re A Lady hooked up with odds-on favorite Castle Blaze leaving the far turn and prevailed over that rival to win the Glass Slipper by a little more than a length, completing the 1 1/16-mile event in 1:44.33. Castle Blaze was seven lengths clear of pacesetter Dazzling Danielle, who finished third. Heather Dreyfuss owns the winner, who was bred in Florida by Stanley Ersoff. Trained by Adolfo Exposito, You’re A Lady had already won races at Tampa, Delaware and Laurel this year before shipping to the Claiming Crown. Willie Martinez was aboard the winner, who earned $41,250 while returning $6.00 as the second betting choice. 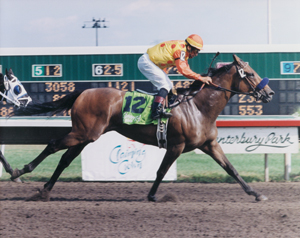 The fans made the Scott Lake trainee Emperor Tigere the deserving favorite as the 5-year-old front-running gelding had won eight of his last nine starts. Though well clear in upper stretch, he could not hold off the charge of the Dante Stable’s Aplomado, who prevailed by a little more than a length under a rousing ride from the ageless Laffit Pincay Jr. Prairie Meadows shipper Will Try was disqualified from third and placed fourth after impeding Oto No Icy along the rail. Trained by Vladimir Cerin, Aplomado completed the 6 1/2 furlongs in 1:16.27. The winner, a 6-year-old California-bred Flying Paster gelding, paid his backers $5.60 while earning the $55,000 winner’s share. 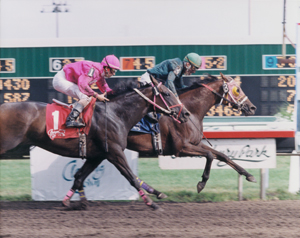 As the day wore on, several riders had noted the going seemed better racing along the rail. Jockey Tim Doocy shrugged off his disqualification in the previous race to pilot Taffy in a clever trip that saw her come from well back to slice inside favored Partial Profit and take the Tiara by a neck in the final strides. Partial Profit’s entrymate Frosty Peace rallied for third, 5 1/2 lengths behind the top pair. Gary Thomas trains the Churchill Downs-based filly for owners Dale Allen and Bridget Kincheloe, who also bred Taffy. The 4-year-old daughter of Saratoga Six was bred in Texas and completed the 6 1/2 furlongs in 1:17.37. Taffy earned the winner’s share of $68,750 and returned $14.80 as the fifth choice in the wagering. 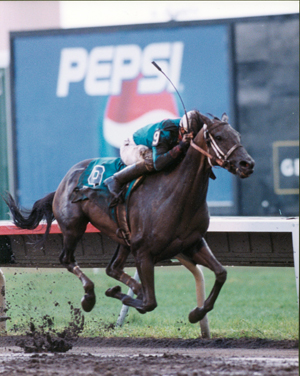 Fourteen runners faced starter Bud Keen for the start of the $150,000 Claiming Crown Jewel, which was run just minutes after a brief torrent of rain converted the track condition to sloppy. Longshot Philadelphia Park shipper Speedy and Bright set the pace for six furlongs before drifting off the rail, clearing the way for One Brick Shy, who had hugged the rail from the break. Jockey Eddie Martin gunned his mount clear in the final stages to win the Jewel by 5 3/4 lengths. Jere Smith trainee Honest Venture, who had pressed the pace three-wide throughout, held second a length and a quarter clear of local favorite Captain Ripperton, part of the mutuel field who made the most of an inside trip. One Brick Shy completed the 1 1/8 miles in 1:50.79. The winner, a Louisiana-bred 4-year-old gelding by Rare Brick, is trained by Troy Young for owners Michele Rodriguez, Pete Wilson and G. Sterck. One Brick Shy, who had won four races this year at the Fair Grounds racing primarily against state-bred company, earned $82,500 for his victory in the Jewel.

The winner returned $26.80 as the fifth choice in the wagering and capped generous exactas and trifectas, paying $372.20 and $12,402.00, respectively. Canterbury offered its patrons a guaranteed $100,000 Pick-6 pool on the Claiming Crown sequence which was paid to ticket holders with five winners, each receiving $2,782.00. Additionally, the track had reduced takeout on its Pick-3, Trifecta and Pick-6 wagering pools to stimulate interest at simulcast sites.

A Start to Build On

Canterbury Park had taken steps to deliver its simulcast signal of the Claiming Crown to 330 out-of-state betting outlets and was rewarded with the largest single-day handle record in the history of the track, with wagering from all sources totaling $2,568,551, including on-track handle of $861,959. On-track attendance totaled 11,380, the highest recorded since the track-re-opened for live racing in 1995.

“It was a good day, and it’s going to get nothing but better,” Canterbury president Randy Sampson said. “I’m disappointed in the out-of-state handle, because we were hoping for about $2 million, but we crushed on track. To get the kind of handle we did on track is tremendous for us. It won’t be profitable for us this year, but we’re really pleased.”

Simulcast handle was strongest in California, where wagering on the Claiming Crown exceeded $550,000. The simulcast sales were surprisingly low in Kentucky, with just $3,200 wagered. Major outlets including Churchill Downs, Turfway Park, and Ellis Park did not take the signal. “That was a major disappointment,” said Sampson.

Still, Canterbury’s President and General Manager found much to look forward to in future runnings of the Claiming Crown. He cited the late promotional starting date and lack of familiarity with the event as reasons for the low number of nominations. “We weren’t realistic this year, but it was a case of not getting the information out to horsemen early enough,” Sampson said. “That seemed to be the sentiment in the board meeting we had this week,” he continued. “The focus was more on how promising this event is.”

Horsemen visiting Canterbury Park for the first time echoed that sentiment. Commenting on the ease of Pioneer Spirit’s trip for the Claiming Crown, trainer Keith Sirota recounted “As far as any race day adjustments, there were none. I was able to send my horse to a trainer, Tim McKinsey, who is a friend of mine, to watch over the horse for a couple of days before I got there. The day itself was pretty smooth and just like being at home. It couldn’t have gone any easier if I had been at Monmouth Park.”

Two Tex Sutton flights, one originating on the East Coast and the other in California, helped several trainers defray the cost of shipping Claiming Crown contenders to Canterbury Park. Coordinating their efforts with the Canterbury racing office, the shipping company received praise from several trainers for making the experience hassle free. No flight arrangements were available for runners shipping from Texas and Louisiana, giving the connections of One Brick Shy some last minute hurdles to jump in order to make the race.

Canterbury Park officials are hopeful that they will receive enhanced backing of the Claiming Crown event from the NTRA in the coming year. Former National HBPA President and current NTRA board member Bill Walmsley was on hand to watch the event and promised that organization’s needed support. “I anticipate that as this event grows, you’ll see greater and greater involvement by the NTRA.”