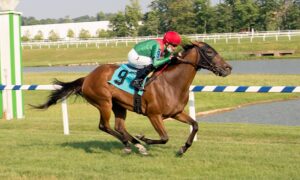 Beantown Baby earned an automatic berth to the Claiming Crown with her victory in the Distaff Dash Preview Oct. 10 at Laurel Park, a gutsy neck decision over Whispurring Kitten. She joined Arnaud Delacour’s string at Tampa Bay Downs in mid-November and the trainer said she has been thriving since.

“She’s been down to Florida for about three weeks now,” Delacour said. “We kind of gave her plenty of time after the win at Laurel and she came back with two very good works at Tampa, so I’m happy with how she’s doing.”

Third or better in 12 of 14 lifetime starts, Beantown Baby broke from the rail at Laurel and saved ground under Mychel Sanchez before tipping out around the far turn. She opened up a two-length lead at the top of the stretch and dug in to win the 5 ½-furlong turf sprint.

“She broke a touch slow last time for some reason, and being on the inside we didn’t have a lot of options. I think Sanchez did the right thing and let her settle there,” Delacour said. “Usually she breaks and puts herself right there, so she was a little bit far off but she ran a good race.”

Delacour claimed Beantown Baby for $25,000 out of a January 2020 win at Tampa, her first start since an eye-catching maiden claiming triumph five months earlier at Colonial Downs in her grass debut. Since then she has gone 4-2-2 in eight tries including a three-race win streak over the summer in races at Laurel, historic Pimlico Race Course and Delaware Park.

“She beat us at Colonial Downs the first time she won. I was pretty impressed with the way she did it,” Delacour said. “She didn’t run for a while and when she came back at Tampa, Barry Irwin of Team Valor called me and said, ‘Do you know that filly?’ I said, ‘Yes, as a matter of fact I do. I liked the way she won last year.’ He said to go and see her and if I liked her to claim her, and that’s what we did.

“The key with her was it was a dramatic change between dirt races and turf races,” he added. “Being by Artie Schiller we felt like there is some upside there, so we took a shot.”

Beantown Baby drew Post 6 in an overflow field of 14 for the Distaff Dash, with Sanchez named to ride. In her only previous stakes attempt, she was third by a half-length over good ground in the July 26 Andy Guest at Colonial.

“I always thought she was better on firm turf. Unfortunately, when we ran her a few times and ran in the stakes it was not very firm and it wasn’t really to her liking. I think she’ll like Gulfstream very much. If the forecast stays the same, it should be pretty firm. She likes it. She can break, be forward and hope for the best,” Delacour said. “They’re competitive races, so it’s going to be a little bit of who gets the best trip.”

All My Hart Racing, Inc.’s Payntdembluesaway will be making her second start off an eight-month layoff in the Distaff Dash. The 5-year-old Paynter mare ran sixth behind stakes winner Can the Queen in her return over a yielding turf course Oct. 28 at Laurel Park.

“It wasn’t so much that she needed the race, but she was in the [11] hole,” trainer Jane Cibelli said. “It was just an impossible task. The race didn’t set up for her and we had to use her up early to get position, otherwise she would have been stuck so wide on the turn. It was just a mess.”

Payntdembluesaway exited the race in good order and returns Gulfstream, where she is 3-for-4 lifetime and a perfect 3-0 over the course. She strung together six straight wins from September 2019 to Jan. 28, five of those under jockey Paco Lopez, who rides back from Post 9.

“She bounced out of it well. I kind of had the Claiming Crown in my sights anyway. I wanted to give her a race thinking she had been out so long. I didn’t want to jump into the Claiming Crown off an eight-month layoff,” Cibelli said. “She does like Gulfstream, and she likes Paco. We’ll see where she draws and what else goes in there, but she’s training well going into it and that’s all you can really hope for.”

Last year’s Distaff Dash was won by Jakarta, trained by Mike Maker, who owns a record 18 career Claiming Crown wins. He entered two horses, Anonymously and Strong Odor. Paradise Farms Corp. and David Staudacher’s Anonymously, first on the also-eligible list, has  made three starts out of a $32,000 claim in July at Del Mar, while Freddy Lewis Jr.’s homebred Strong Odor picked up her most recent win in an Aug. 11 optional claiming allowance at Saratoga.

Second as the favorite a year ago, Mad Dog Racing Stable, Isla Stables and Big Frank Stable’s Sugar Fix will get the chance to reverse that outcome when she returns to action in Saturday’s $95,000 Claiming Crown Tiara at Gulfstream Park.

The 1 1/16-mile Tiara is one of nine starter stakes worth $810,000 in purses on the 23rd Claiming Crown program, being held at Gulfstream for the 10th consecutive year. The Tiara and $90,000 Distaff Dash sprinting five furlongs, both for fillies and mares 3 and up which have started for a claiming price of $25,000 or less in 2020-21, are among four stakes scheduled for the turf.

Created by the National Horsemen’s Benevolent and Protective Association in partnership with the Thoroughbred Owners and Breeders Association, the Claiming Crown rewards and pays tribute to the horses and horsemen that provide the foundation for day-to-day racing programs at tracks around the country.

Post time for the first of 11 races is noon.

Trainer Saffie Joseph Jr. upset last year’s Claiming Crown Emerald with 55-1 long shot High Noon Rider and looked headed toward a second victory on the 2020 program when Sugar Fix, sent off as the 8-5 Tiara favorite in a field of 10, opened a 1 ½-length lead at the top of the stretch. She was unable to hold off a late run from Queens Embrace, who drew clear in the final sixteenth of a mile to win by 2 ¾ lengths.

A nine-time career winner, Sugar Fix began her 4-year-old campaign as the favorite in the Jan. 16 Sunshine Filly & Mare Turf and set the pace along the rail, leading into the stretch before getting caught late and running fifth, beaten less than a length. She finished off the board in a stakes road trip to Tampa Bay Downs in March, but returned with back-to-back wins and a second in three subsequent starts between May and July at Gulfstream.

Favored again in her most recent start, Sugar Fix forged a short lead after six furlongs but was unable to hold it, fading to fourth in a one-mile, 70-yard starter Sept. 8 at Kentucky Downs. The bay daughter of Treasure Beach won a similar spot over the unique turf course last summer by 1 ¾ lengths.

“She got in a good rhythm during the summer,” Joseph said. “We took her to Kentucky Downs for the race she won last year, but she ran a little disappointing. She seems like she’s in good form.”

Sugar Fix has tuned up for the Tiara with seven works over the main track at Palm Meadows, Gulfstream’s satellite training facility in Palm Beach County. Edgard Zayas, coming off Gulfstream’s fall meet riding title, will climb aboard from Post 8 in a field of 12 at 122 pounds.

“We couldn’t get a prep for this race, but I feel like she’s training well,” Joseph said. “We feel she’s going to be close.”

Also returning from last year’s Tiara is Isadorable Aida, who ran ninth. Claimed for $16,000 by trainer Carlos David following a fourth-place finish May 7 at Gulfstream, Michele and Lawrence Sargent’s Temple City mare has a win, two seconds and a third in five races for her new connections.

Victory Racing Partners’ Kahiko enters the Tiara off a 1 ½-length triumph in a one-mile, 70 yard optional claiming allowance over Gulfstream’s Tapeta surface. It was the third win in four starts for the 4-year-old First Samurai filly, the others coming on the Gulfstream turf.

“She’s doing super,” trainer Kent Sweezey said. “When we got her, we knew that she had some talent but we weren’t sure what level she was going to fit in down here. Sometimes when you run them for a tag, it obviously makes them eligible for a starter and if we thought we could get her by for $25,000 like we did, that looked to be a good idea. She’s doing really good and she loves Palm Meadows.

“I have the same girl that rides her every day,” he added. “They get along good and they go along what they call ‘the path’ at Palm Meadows. It’s like a trail that goes back behind there and she just does her thing and they do their thing and it’s really working out good. Happy horses win races and I’m telling you, she couldn’t be doing any better.”

Paco Lopez gets the call on Kahiko from Post 1 at topweight of 124 pounds.

“The ownership group is going to come down and they’ll be here in full force, so that’s exciting,” Sweezey said. “She’s doing good, and those guys are a lot of fun. They’re a young group just getting started. Hopefully we can get them a Claiming Crown win. That would be great.”

Paradise Farms Corp. and David Staudacher’s Whimsical Muse will attempt to give trainer Mike Maker his fourth Tiara victory following Starsilhouette (2012), St. Borealis (2014) and Peru (2018), and add to his career record of 18 Claiming Crown wins. The 5-year-old Oxbow mare won a one-mile claiming event June 17 at Churchill Downs and has run second in her last two, the most recent Sept. 8 at Kentucky Downs.