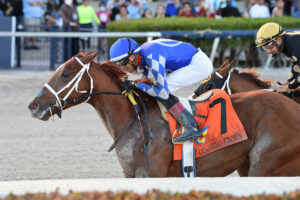 A total of 95 of some of the nation’s top claiming-level horses, including seven also-eligible entries, have been entered in Saturday’s 24thannual Claiming Crown Championship Series, which will be staged beneath Churchill Downs’ historic Twin Spires in Louisville, Ky. for the first time.

The Claiming Crown features lucrative prize money for horse racing’s blue-collar athletes as they compete for $1.05 million in purses over eight races with starter allowance conditions. The event will bring together claiming-level horses from around the country as horses based in 11 different states are represented: Kentucky, California, Florida, Illinois, Indiana, Maryland, New Jersey, New York, Ohio, Oklahoma and Pennsylvania.

The first of 11 races Saturday is 1 p.m. (all times Eastern) and the Claiming Crown will cover Races 4-11 starting at 2:30 p.m. Racing from Churchill Downs is scheduled to be televised on FS2’s “America’s Day at the Races” from 2-6 p.m.

Fans can bet on the Claiming Crown on www.TwinSpires.com, the official wagering provider of Churchill Downs Inc. and the Kentucky Derby.

TWELVE VOLT MAN BACK TO DEFEND TITLE IN CLAIMING CROWN JEWEL – Magic Cap Stables’ Twelve Volt Man will defend his title against a field of 10 colts and geldings that were entered in Saturday’s $175,000 Claiming Crown Jewel at Churchill Downs.

Saturday’s 24th annual Claiming Crown Day will feature eight races for some of the nation’s top blue collar horses. This is the first time the event will be held at Churchill Downs. First post is 1 p.m. and the featured Jewel will go as Race 10 of 11 at 5:35 p.m.

Trained by Saffie Joseph Jr., Twelve Volt Man has competed for the majority of his 10-race career in South Florida with the exception of a third-place finish in the $100,000 Jazil Stakes at Aqueduct in New York. The 4-year-old gelded son of Violence started for a $35,000 claiming tag on Oct. 14, 2021 to become eligible for the Claiming Crown.

In last year’s Jewel at Gulfstream Park, Twelve Volt Man finished three-quarters of a length in front of Hanalei’s Houdini to spring the 10-1 upset victory under jockey Edwin Gonzalez. Saturday’s Jewel will be the first start for Twelve Volt Man since winning a starter handicap at Gulfstream Park on Aug. 28. Gonzalez will be in town to ride and the duo will break from post No. 9.

One of the top local hopes in the Jewel is multiple stakes-placed Intrepid Heart. Owned by Jack Wagon Stables and trained by Joe Sharp, Intrepid Heart finished a hard-fought second to stablemate Twilight Blue in the $200,000 Fort Larned on Aug. 13 at Churchill Downs. The former $25,000 claim sports an overall record of 27-8-7-4 with earnings of $520,382. Since Sharp claimed Intrepid Heart on Sept. 24, 2021, the 6-year-old gelded son of Tapit has only finished off the board once and hasn’t finished worse than second in his last seven starts. Tyler Gaffalione will have the mount on Intrepid Heart and break from post 5.

Among the other competition entered in the Jewel is Happy Got Lucky Stable’s $153,000 Maryland Millions Day Classic winner Ournationonparade. Trained by Parx-based conditioner Jamie Ness, Ournationonparade was claimed off Chris Hartman for $50,000 on Sept. 28 and went on to win the Maryland Millions Classic by 5 ¾ lengths as the 2-1 favorite. Jockey Paco Lopez will be in the irons from post 10.

Trained by Brittany Vanden Berg, Bad Beat Brian was claimed for $40,000 on July 23 at Ellis Park when he finished a narrow second to Fore Left as the 4-5 favorite. In last year’s Claiming Crown Canterbury Tom Metzen Memorial, Bad Beat Brian rallied from more than six lengths off the early pace to defeat Xy Speed by one length. Following that start, Bad Beat Brian tested stakes company at Sam Houston in the $100,000 Pulse Power Turf Sprint where he was the runner-up by 1 ½ lengths to Seven Scents. Most recently, the 5-year-old gelded son of Jack Milton finished fourth, beaten two lengths, in the $350,000 Woodford (GII) at Keeneland. Vanden Berg’s husband, Chris Emigh, will be in the saddle from post No. 2.

Trained by Desormeaux, Candy Raid became eligible for the Tiara by running in a $25,000 claiming event on Oct. 27, 2021 at Horseshoe Indianapolis where she finished fourth. Earlier this year, the daughter of Candy Ride (ARG) qualified for the $1.25 million Longines Kentucky Oaks with her 4 ½-length victory in the Bourbonette Oaks at odds of 52-1. In the Kentucky Oaks, Candy Raid finished a troubled ninth when she lost position at the 5/16–pole and had to check repeatedly. The Tiara will be her first start since the $225,000 Iowa Oaks (GIII) on July 9 where she finished fourth. Jockey Corey Lanerie will have the call from post No. 10.

Trained by Robert Medina, Family Man won his career debut in a maiden $10,000 claiming event on May 14, 2021 at Churchill Downs. Since that start, the 5-year-old son of First Defence has won three other races in Louisville, all against starter allowance foes. Family Man has not finished worse than second in his last four starts. In his last start, Family Man returned from a 10-week layoff to finish second at even-money to All West on Oct. 2 at Churchill Downs. Tyler Gaffalione, who’s been aboard Family Man for seven of his lifetime starts, will have the call from post No. 6.

Trained by Tianna Richardville, who is also the principle owner of Thirsty Acres Racing, Longleggedlaverne was victorious in her last four races at Horseshoe Indianapolis against starter allowance company. Overall, the 5-year-old mare by American Lion has won 12 of 36 lifetime starts and banked earnings of $168,543. Longleggedlaverne will be ridden by her regular rider Joe Ramos, who was aboard in her last four starts, from post No. 4.

BEVERLY PARK SET TO MAKE 26TH START OF THE YEAR IN $100,000 READY’S ROCKET EXPRESS – Built Wright Stables’ Beverly Park has been the picture of consistency since trainer Lynn Cash claimed him for $12,500 on Aug. 5, 2021, recording 17 wins from 33 starts. Now, the 5-year-old son of Munnings will attempt his biggest victory to date in the $100,000 Ready’s Rocket Express as part of Saturday’s Claiming Crown Day at Churchill Downs.

The Ready’s Rocket Express was carded as Race 8 on the 11-race program. Post time for the six-furlong dash is 4:33 p.m. with the first race scheduled at 1 p.m.

Blue Steel, previously campaigned by trainer Jeff Hiles, was transferred to George Leonard III for his return to the races. In last year’s Iron Horse at Gulfstream Park, Blue Steel was the half-length victor over Zanesville. The nine-time winner will be ridden by Mitchell Murrill from post No. 3.