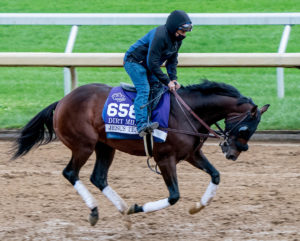 Grade 1 stakes-placed in his two most recent starts, Jesus’ Team will return to his roots Saturday with a start in the $150,000 Claiming Crown Jewel at Gulfstream Park.

Grupo 7C Racing Stable’s 3-year-old gelding, who became eligible for the Jewel while winning a claiming race for maidens at Gulfstream last March, is scheduled to use the Claiming Crown headliner as a prep for a planned start in the $3 million Pegasus World Cup Invitational (G1) at Gulfstream Jan. 23.

Jesus’ Team enters the Jewel off a third-place finish in the Oct. 3 Preakness Stakes (G1) at Pimlico and a second-place finish Nov. 7 in the $1 million Breeders’ Cup Dirt Mile (G1) at Keeneland – unlikely results from a horse that broke his maiden for a $32,000 claiming price in his fifth career start March 18.

“He went to Ocala for 10 days after the Breeders’ Cup. He is training very good for the Claiming Crown,” sand trainer Jose D’Angelo, whose stable is based at Palm Meadows, Gulfstream Park’s satellite training facility in Palm Beach County. “I think this is a good race for him before the Pegasus. He needs a race before the Pegasus.”

After his breakthrough 3 ¾-length maiden win, Jesus’ Team was transferred to D’Angelo, for whom the son of Tapiture came right back to score a dominating 6 ¾-length victory in a $25,000 claiming race May 8. A most promising second-place finish behind graded-stakes winner Sole Volante in a stakes-quality June 10 optional claiming allowance at Gulfstream raised the expectations of his connections.

Following a creditable fourth behind future Kentucky Derby (G1) and Breeders’ Cup Classic (G1) winner Authentic in the Haskell (G1) and a runner-up finish in the ungraded Pegasus at Monmouth, Jesus’ Team finished third in the Jim Dandy (G2) at Saratoga while equipped with blinkers for the first time. The Kentucky-bred gelding, who was purchased for $30,000 at the 2018 Keeneland September sale, overcame traffic on the far turn to finish a distant third behind Gulfstream Park Oaks winner Swiss Skydiver and Authentic at 40-1 in the Preakness Stakes at Pimlico. Sent to post at 62-1 for the Dirt Mile, Jesus’ Team closed to finish second behind runaway winner Knicks Go.”

“I am very proud of my horse. He’s getting better and better with every race,” D’Angelo said. “I think he will run a very good race Saturday.”

D’Angelo was the leading trainer in Venezuela before joining his father Francisco, also a former titlist in Venezuela, in South Florida in 2019.

“I’m happy for the races Jesus’s Team has run. He has made me very proud,” said D’Angelo, who saddled his first horse in the U.S. in June 2019 and saddled his first winner with his second starter three weeks later. “I’m happy to be training in this amazing country.”
Luis Saez, who was aboard for the Dirt Mile, has the return mount Saturday.

Calumet Farm’s Dack Janiel’s, also a horse who performed extremely well on Breeders’ Cup Weekend at Keeneland, is scheduled to seek his first stakes victory in the Claiming Crown Jewel.

The Jack Sisterson-trained 3-year-old gelding is coming off a third-place finish in the $200,000 Thoroughbred Aftercare Alliance (G2). Dack Janiel’s set or pressed the pace to hold a narrow lead in mid-stretch before weakening late in the 1 5/8-mile route.

“Dack Janiel’s is a horse that has always overachieved for us, but he really thrives on racing. He just won 10 days before the Thoroughbred [Aftercare] Alliance, but we wheeled him back in a week at Oaklawn [in April] and he won bringing him back quick,” Sisterson said. “He seems to thrive on his training and running, so we ran him [at Keeneland] and he ran a competitive race against some tough horses. Fortunately, he’s eligible for Claiming Crown Jewel.”

Dack Janiel’s became eligible for the Jewel in January when he ran third in a $30,000 maiden claiming race on turf at Fair Grounds. The son of Tonalist came right back to win an off-the-turf maiden special weight race at Fair Grounds a month later. After finishing off the board in the Jeff Ruby Steaks (G3) at Turfway, Dack Janiel’s followed up a fourth-place allowance finish at Oaklawn with a starter allowance victory eight days later. Winless in his next three starts, he returned to winning form in a $50,000 claiming race at Keeneland that set him up for his strong showing in the Thoroughbred Aftercare Alliance.

“He’s very straightforward. He trains himself. There’s no hiding his running style. He goes right to the front,” said Sisterson, who will train in South Florida for the first time this winter. “He seems to run his best races forwardly placed, so we’re obviously not hiding any tactics heading into next Saturday.”

Julien Leparoux has the mount on the Calumet Farm homebred.

Team Valor International and David Burnett’s Storm Runner, who finished seventh in the 2018 Florida Derby (G1), has returned to Gulfstream to run in the Jewel. The Dale Romans-trained son of Get Stormy became eligible for the Jewel by coming off a seven-month layoff to win a $20,000 claiming race at Churchill Downs June 28. Following a four-month layoff, Storm Runner captured a Nov. 4 starter allowance on turf at Churchill Downs.
Corey Lanerie has the call aboard Storm Runner.

Trainer Michael Maker, who has saddled a record 17 Claiming Crown winners, will send out Paradise Farms Corp.’s Treasure Trove for a start in the Jewel. The 4-year-old son of Tapizar was claimed for $40,000 out of his most recent start, a second-place finish in an optional claiming allowance at Indiana Downs.

Tyler Gaffalione, who captured titles at all six meeting in Kentucky this year, has the call.

Leitone, the defending Jewel champion, will defend his title for owner/trainer Victor Carrasco Jr., who claimed the Chilean-bred 6-year-old for $40,000 out of a victory at Belmont Park June 20. The son of Dunkirk has been off-the-board in his two starts since being claimed.

Hector Berrios has the call aboard Leitone.

Stakes-placed on turf last time out, D P Racing LLC’s Prince of Arabia will move to dirt for the Jewel. The 7-year-old gelding, who finished a troubled third in the Ricard Henry Lee last out, achieved his most recent victory in an off-the-turf Feb. 20 optional claiming allowance at Gulfstream. Robby Albarado is scheduled to ride Prince of Arabia for the first time.

My Purple Haze Stable’s Rebelde and Flying Pheasant Farm LLC’s Toughest ‘Ombre round out the field.