Claiming Crown to Churchill Downs for 2022

Claiming Crown to Churchill Downs for 2022 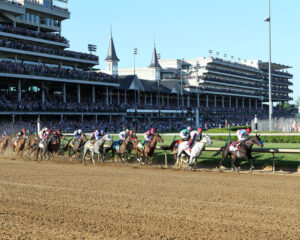 The Claiming Crown heads to its sixth location for the 24th renewal in 2022, with Churchill Downs set to host the event for the first time.

The National Horsemen’s Benevolent and Protective Association and the Thoroughbred Owners and Breeders Association (TOBA) partner to put on the Claiming Crown, which is open to all claiming horses. Originally designed to be the claiming horse owners’ version of the Breeders’ Cup, the special racing event highlights the sometimes-forgotten “average owner” and features some of the most competitive horses in the country.

The 2022 Claiming Crown will be run Saturday, November 12, in Louisville, Kentucky, just a week after the 39th Breeders’ Cup World Championships at Keeneland Race Course in Lexington.

“The National HBPA Board of Directors with President Doug Daniels and our regional vice presidents are extremely pleased to announce—along with our partners TOBA and the Kentucky HBPA—that the 2022 Claiming Crown will be moving to Churchill Downs,” said Eric Hamelback, CEO of the National HBPA. “The Claiming Crown has continued to grow in popularity with owners, trainers and especially horseplayers. We truly believe these races epitomize the backbone of the horse racing industry.

“The Claiming Crown has always recognized the excellence of Thoroughbred racing’s heroes,” Hamelback added. “It’s a priority for the HBPA and our partners to provide this day showcasing the blue-collar horses, their owners and trainers who make racing programs across America possible and generate handle for racetracks’ marquee days.”

Churchill comes on board to host the Claiming Crown after a successful 10-year run in South Florida at Gulfstream Park. Total handle for the 2020 renewal was a record $14,611,560, and the 10 highest Claiming Crown handle days all came at the Hallandale Beach venue.

Churchill set a handle record for this year’s Kentucky Derby—$179 million, up 17 percent from a year ago. The Churchill fall meeting runs from October 30 to November 27 on a Wednesday to Sunday schedule, with the exception of the two-day window November 4-5 when Keeneland hosts the Breeders’ Cup.

“There’s no better place to stage a racing event than at Churchill Downs,” said Mike Ziegler, senior vice president and general manager of Churchill Downs. “From annually hosting Kentucky Derby Week to hosting the Breeders’ Cup on nine occasions, Churchill Downs is synonymous with championship racing. We’re thrilled to partner with the HBPA and TOBA and welcome our sport’s blue-collar star athletes, as well as their owners, trainers and jockeys, to Louisville for the Claiming Crown during our fall meet this November.”

“We all feel it is important to see this amazing day of races take place as it has been for more than 20 years,” said National HBPA President Dr. Doug Daniels. “We are pleased to work together with TOBA in creating an event that has become a highlight of each year’s racing calendar. Our goals, along with the Kentucky HBPA and Churchill Downs, will include raising the profile of the Claiming Crown and highlighting to horsemen and horsewomen throughout the country that this event takes place because of and for them. We could not be more pleased to bring the event to Churchill.”

The National HBPA and TOBA also announced in May that details are in the works to return the 2023 Claiming Crown to Fair Grounds in New Orleans. Fair Grounds hosted the 2011 event.