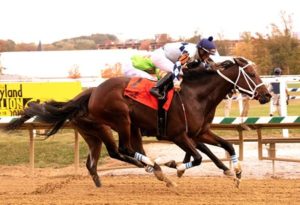 Shirley Lojeski’s Forest Fire will bring stakes credentials into Saturday’s $200,000 Claiming Crown Jewel, which will highlight the $1.1 million, nine-race event for horses that have raced for a claiming price of $35,000 or less.

The Claiming Crown, which will be hosted by Gulfstream Park for the eighth consecutive year, is a tribute to the blue-collar horses that serve as the backbone of day-to-day thoroughbred racing. First-race post time is set for 11:50 a.m.

Forest Fire may not be a blueblood but it’s a bit of a stretch to view the 4-year-old gelded son of Friesan Fire as strictly a blue-collar horse.

“He had shown that he was a stake horse early on in his career,” trainer John Servis said. “In his third or fourth start we put him in a stake and he got beat by three-quarters of a length, so we always knew he had talent.”

Forest Fire finished a close second in the 2018 Private Terms Stakes for 3-year-olds at Laurel Park after back-to-back victories in his second and third career starts. The Pennsylvania homebred went on to win two of his next three starts before heading to the sidelines with a knee chip. He may have seemed headed to the claiming ranks when he returned to action with a pair of dismal efforts, but he turned things around after a throat condition was addressed.

“Because those races were so bad, it gave us an opportunity to take a little bit of an edge and run him for a tag to take a shot and see if we could get a win,” Servis said. “Since the throat surgery, he’s come back running and running good.”

“He seems to be getting even better. Paco Lopez rode him in Maryland and he thought there was a lot of horse left. He felt like he was just toying with those horses,” Servis said. “We’re excited about him going in the right direction and seeing what he is.”

Lopez has the mount in the 1 1/8-mile Jewel, in which Forest Fire will face eight rivals.

“I think I’m going to have to beat my family members, the way it looks,” said Servis, whose brother Jason will be represented by M and A Racing LTD’s Leitone and whose son Tyler will saddle Troy Johnson and Charles Lo’s Degrom.

Leitone, a Group 1 winner in Chile, was claimed out of a 13 ¾-length victory for a $12,500 price June 16 at Belmont Park. The 5-year-old son of Dunkirk has raced four times, winning both starts on dirt. Most recently, Leitone captured a $50,000 claiming race at Belmont Park by 7 ½ lengths. Jose Lescano has the mount aboard the Chile-bred.

Degrom, who won at first asking at Colonial Downs after being claiming for $20,000 at Parx July 15, finished second to a next out winner in a Laurel optional claiming allowance last time out. Tyler Gaffalione has the call aboard the 5-year-old Congrats gelding.

Trainer Jorge Navarro, who saddled Aztec Sense for a victory in last year’s Jewel, is scheduled to saddle a pair of entrants in the grand finale of the Claiming Crown event – Flying P Stable’s Ekhtibaar and Woodland Farms’ Holiday Bonus.

Ekhtibaar will be making his first start for his new connections since being claimed for $25,000 out of a fourth-place finish over a sloppy Saratoga track Sept. 2.

“We claimed him at Saratoga with the intentions of running him in the Claiming Crown. The horse is training really good,” Navarro said. “We’ve made changes. He’s training like a good horse.”

The 6-year-old son of Bernardini, a Shadwell homebred who began his career with Chad Brown, will be ridden by Kendrick Carmouche.

“He’s been running against some good horses in New York. He was sent to my barn to aim for the Claiming Crown,” said Navarro, who has saddled nine Claiming Crown race winners, second only to Michael Maker’s 16. “We’ve had nowhere to go with him. He’s run out of conditions. He’s been training really good, also.”

Ricardo Santana Jr. has the mount aboard the 5-year-old gelded son of Harlan’s Holiday.

Town and Country Racing LLC’s Third Day enters the Jewel off back-to-back wins at Churchill Downs. The Brian Lynch-trained 5-year-old gelding, who was third in the Ben Ali (G3) at Keeneland in the spring, became eligible for the Claiming Crown while winning a $32,000 claiming race Nov. 2. The son of Bernardini came right back 12 days later to win an off-the-turf optional claiming allowance by three lengths.

Julian Leparoux has the mount aboard Third Day, who captured an overnight stakes during Gulfstream’s 2016-2017 Championship Meet.

Three Diamonds Farm’s Noble Thought also enters the Jewel off an off-the-turf optional claiming allowance at Churchill Downs. The Michael Maker-trained 6-year-old gelding, who is graded stakes-placed on turf and finished fifth in the Sword Dancer (G1) at Saratoga last summer, was claimed by his connections out of a victory in an off-the-turf $25,000 claiming race at Fair Grounds last March.

Jorge Vargas Jr. has been named to ride the son of Harlan’s Holiday for the first time.