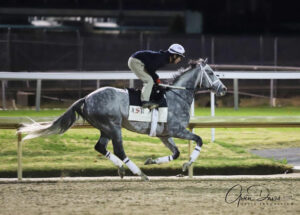 “It’s the Breeders’ Cup for claiming horses,” said Sharp, the winner of 738 races and more than $32 million in purses in a training career that started in late 2014. “It’s their day. They are hard-knocking horses that grind it out year in and year out. It’s a day to celebrate the horses that show up and suit up and are just ultra-consistent. There’s a lot to be said and respected for those kinds of horses. They might not be at the graded level, but this is their day to celebrate them.”

Jack Wagon Stables’ 6-year-old Intrepid Heart, a son of Tapit and $750,000 2-year-old purchase, was a well-regarded 3-year-old who wound up being claimed five times at ages 4 and 5 before eventually landing in Sharp’s barn early this year at the Fair Grounds. In six races for Sharp, Intrepid Heart has a win in a starter-allowance race and five straight seconds coming into the Claiming Crown. Those runner-up performances include by a head in Churchill Downs’ $200,000 Fort Larned Stakes won by stablemate Twilight Blue.

The Claiming Crown will be staged in Kentucky for only the second time, having been at Ellis Park in 2007. The event has been at Gulfstream Park in Florida for the past 10 years.

“Obviously it makes it a little more appealing being here at our home track at Churchill Downs,” Sharp said Tuesday at Churchill Downs. “Intrepid Heart, he’s been such a cool horse. We acquired him last spring for a new owner. He obviously has the back class. He was on the Derby trail at one point for Todd Pletcher. He’s just a horse that keeps moving forward. He’s running (handicapping) numbers as good at his age as he was a 3-year-old, which is really cool to see – to see a horse re-rally like that.

“He’s got a little bit of seconditis, he’s a touch camera-shy. We’re hoping we can get the trip and turn in the tables in the big one. He’s been an ultra consistent horse, and you wish you had a barn full just like him.”

Tyler Gaffalione, who has won nine Churchill Downs’ riding titles since he began riding regularly in Kentucky three years ago, has the return mount. Gaffalione, the 2015 Eclipse Award-champion apprentice jockey, comes into the Claiming Crown off getting his first and second career Breeders’ Cup victories: the Juvenile Fillies on Wonder Wheel and the Turf Sprint on Caravel.

“He seems to get along with him really well,” Sharp said. “No one is more frustrated with the seconds than Tyler.”

Sharp also picked up Brian Dugan’s Spycraft in the spring, winning an Indiana allowance race right off the bat, followed by a $100,000 stakes in Minnesota. He’s had a pair of sixths in two starts since.

“We tried some deeper water,” Sharp said. “We’re looking forward to getting him back into some starter company here. It’s a race that seems to be coming up a little bit on the tougher side. But he’s a horse that obviously has the back class and is good going 5 1/2 furlongs. I have a lot of confidence in him.”

Big Agenda travels to Churchill Downs from New York and will be made eligible to run with the $1,000 late fee for the $150,000 Emerald.

“We were running out of places on grass to run,” Sharp said. “But he’s a neat horse. He’s a horse we’ve claimed twice, for two different owners, over the course of this year. I looked a little crazy claiming a 7-year-old back this year, but he’s one of those horses I just like. He won last time out. He has some back class. He’ll be a little bit of a price, but if he gets the trip I think he’s going to be super competitive.”