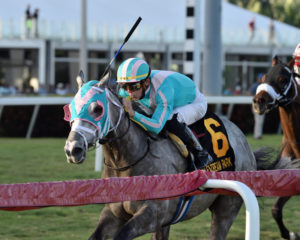 This marks the ninth straight year in South Florida and 22nd overall for the Claiming Crown, created in 1999 to honor the blue-collar horses that are the foundation of the racing industry nationwide. Total handle for the Claiming Crown has surpassed $10 million each of the past five years, topped by a record $13.846 million in 2019.

“He didn’t get the best trip that day. We kind of thought that if he had gotten out a little bit earlier he would have gotten closer,” Joseph said. “When Ricardo told us that, that gave us the confidence to try the Grade 3. He got a perfect trip in the Grade 3 and ran a huge race.”

Joseph brought Tusk back in the one-mile Tropical Turf (G3) Jan. 11, and he responded to the step up in class with a two-length victory. He was on the also-eligible list for the $3 million Pegasus World Cup Invitational (G1), run two weeks later, but he was sidelined with a hind leg injury suffered in training.

“He had surgery and he seems to have come back well,” Joseph said. “Obviously he’s coming off a layoff but his last race was his best race and that was a Grade 3 that he won quite well. Coming off a layoff so you always wonder if you have them fit enough, but since we got him, he’s been in like 2 ½ months, three months, he’s had a strong series of works. I feel like we’re going in there with a chance.”

Tusk will be joined by stablemate High Noon Rider and Rijeka in the Emerald. GenStar Thoroughbreds’ High Noon Rider owns five one second and one third in five career tries at Gulfstream. The 8-year-old gelding is winless in his last three, all out of town, the last two in starter events at Kentucky Downs.

“He was in really good form at Gulfstream. He loves Gulfstream. Then they had a starter series at Monmouth so we shipped up there for the first one and it rained off the turf. After that we took him to Kentucky and in hindsight, if we could have done it over, we probably should have just stayed home,” Joseph said. “But if you never take a chance you never know. He lost his form a little bit but we brought him back and got him freshened up since Kentucky Downs, and we’re hoping that Gulfstream gets him back to his form.”

Slam Dunk Racing and Michael Nentwig’s Rijeka is a long-distance specialist that will be cutting back for the Emerald. The 4-year-old won an optional claiming allowance late in last winter’s Championship Meet at Gulfstream, and was second in the Richard Henry Lee Stakes during the summer stand.

“He’s a horse that he’s going to need pace to run at. He ran in Kentucky Downs in one of the Claiming Crown preps and he ran fourth. I think if he gets the right kind of pace and tempo, it could set up for him,” Joseph said. “Ideally his best distance is probably a mile and a quarter, but we ran him in a one-turn mile and 70[-yard race] at Kentucky Downs and he seemed to run well so we’re going to take a chance in this race with him. And he’s won over the course.”

Mike Maker, the all-time leader with 17 career Claiming Crown wins, entered six horses in the Emerald led by Muggsamatic, who captured last year’s Emerald by 1 ¼ lengths and placed in two more stakes during the 2019-20 Championship Meet before joining the Maker barn.

Muggsamatic won the Soldier’s Dancer in his first start for Maker June 6 at Gulfstream against fellow Florida-breds, ran fifth in the United Nations (G1) and third at Kentucky Downs before returning to South Florida for the Millions Turf Preview Nov. 21 at Gulfstream Park West, where he ran fourth.

Over the Channel, first or second in six of seven starts this year; Speed Franco, on a two-race win streak;, King of Spades and Zippy round out the field. Richard Henry Lee winner Morning Stride, Sniper Kitten and Joyful Heart are on the also-eligible list.

Spedale Family Racing’s Grade 2-placed Queens Embrace, racing first off the claim for trainer Danny Gargan, has an opportunity to reward her new connections right off the bat in the $95,000 Claiming Crown Tiara.

Queens Embrace will be making her 12th lifetime start and first since being haltered for $80,000 out of a fifth-place finish in a 1 1/16-mile optional claiming allowance Sept. 24 at Belmont Park.

“She actually ran a really good race that day. She kind of got shuffled back and just kind of stayed where she was, but it was a pretty decent run race. We’re hopeful she’ll show up in there,” Gargan said. “I think if she improves she’ll be really tough to beat. There’s two or three other fillies in there that are similar-type horses. She’s young. I like to claim young horses and she’s 3, turning 4, but if we can get her to run a little bit better numbers then I think she’ll be super live.”

Queens Embrace owns five career wins, four of them coming consecutively over the winter at Tampa Bay Downs for previous trainer Kathleen O’Connell. The filly ran twice at Saratoga over the summer, finishing third in the Lake Placid, beaten just 1 ½ lengths, and seventh in the Saratoga Oaks prior to being claimed.

Gargan ran third by less than a length in the 2019 Tiara with Bareeqa, who was also nominated this year. Luis Saez is named to ride.

“I’m not running Bareeqa because she got some time off. I think this filly is as good as her with the chance to get even better because she’s still so young,” Gargan said. “She’s doing really well and training really good. Hopefully we can get her to go forward. That’s the whole key; we’re trying to get her to go in the right direction. If we can get her to improve a little I think we’ll get a big performance. I’m expecting her to run really well.”

Queens Embrace will see a familiar face in Mad Dog Racing Stable’s Sugar Fix, a filly she beat twice in three starts over the winter at Tampa. The 3-year-old daughter of Treasure Beach has run three times since being claimed by trainer Saffie Joseph Jr. for $40,000 July 30, with one win Sept. 16 at Kentucky Downs.

Sugar Fix’s two losses have both come in graded-stakes, most recently the 1 1/16-mile Valley View (G3) Oct. 16 at Keeneland. She chased the pace before run fifth in the one-mile Lake George (G3) Aug. 28 at Saratoga, her first start for Joseph. The fourth-place finisher in that race, Micheline, came back to win the Dueling Grounds Oaks and run second in the Queen Elizabeth II Challenge Cup (G1).

“I still don’t think she fired her best in that last race but it was definitely a tougher race. Now she’s going back to a similar race as Kentucky Downs, maybe a bit better than that,” Joseph said. “She’s shown a big upside and hopefully she comes back to her Kentucky Downs form. If she does this time, she comes in with a very good chance.

“She was just a filly that seemed to be pretty consistent on the turf and she seemed to be getting better,” he added. “Since we claimed her we’ve liked her and we’ve run her a bit ambitiously each time, but I thought even at Saratoga when she ran fifth the race turned out to be a really good race.”

Robert Masiello’s speedy turf sprinter Fiya, who became a stakes winner last time out, looks to extend his win streak to five races when he makes his South Florida debut in the $90,000 Claiming Crown Canterbury.

Maryland-bred Fiya will spend the winter with trainer Tom Albertrani’s string at Palm Meadows, Gulfstream’s satellite training facility in Palm Beach County. His two most recent wins came after being purchased at auction for $400,000 in July.

“He’s very talented. Since the first time I got him back in August, I was really impressed. I really liked the horse from Day 1, just his appearance and the way he trained,” Albertrani said. “After watching him work a few times I really thought this horse had a lot of talent, and the two times I ran him he’s certainly showed that.”

Fiya was a front-running 3 ¼-length winner against open company Sept. 20 at Belmont Park, then returned to Laurel Park where he had made his previous four starts to capture the 5 ½-furlong Maryland Million Turf Sprint over a course rated good.

“He ran really well at Belmont,the first time we ran him, and then to come back at Laurel over a deep track which he did not even favor, he still managed to get through it and won that day. I think on firmer ground he’ll be a lot more effective,” Albertrani said. “I think there is room for more. He’s still a young horse. He looks fantastic. He’s well put together and I certainly think with maturity this horse could develop to be any kind.”

Fiya has breezed twice at Palm Meadows, most recently a half-mile move in 47.75 seconds over the main track, seventh-fastest of 60 horses. Though he will be giving up seasoning to most of his rivals, Fiya has beaten his elders in each race during his streak.

“The last time he breezed I think he went in 47 and 3 and you almost have to look at your watch and make sure that you got the right time because he does do things so easy,” Albertrani said. “It’s always I guess to a disadvantage when you come into a race with a younger horse but I just think with his performances you have to think he might be the horse to beat in here, really. I’m pretty confident just being around the horse and watching his last couple of races.”

Michael Hui, Hooties Racing and WSS Racing’s Tiger Blood represents the other side of the spectrum, having made 50 starts with 19 wins, nine seconds, two thirds and $514,152 in purse earnings. From the barn of Mike Maker, who leads all Claiming Crown trainers with 17 wins, the 7-year-old gelding exits a sixth in the Jim McKay Turf Sprint Oct. 1 at Pimlico Race Course.

Thinkin Cowtown has raced just three times since her half-length triumph over Unaquoi last December, and just once in the past nine months. Trained by Georgina Baxter, she pressed the pace into the stretch but wound up third by a length Sept. 6 in a five-furlong optional claiming allowance at Gulfstream.

Precocious Peach exits the same race as Thinkin Cowtown, beating her by a neck for second, while 2019 Distaff Dash runner-up Unaquoi will be seeking her first Gulfstream win, having gone winless with two seconds in five previous tries.

Three Diamonds Farms’ Jakarta won an off-the-turf edition of the one-mile Powder Break May 16 at Gulfstream. After finishing off the board in a pair of graded-stakes attempts including one on the dirt, the Bustin Stones mare ran second in the Caress, won a 6 ½-furlong starter at Kentucky Downs and most recently was third by a length in the Buffalo Trace Franklin County (G3) Oct. 9 at Keeneland.