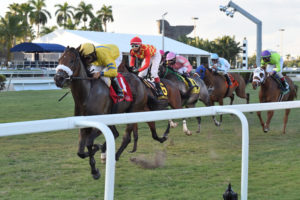 The Canterbury was one of nine stakes in the 22nd edition of the Claiming Crown, an annual event that pays tribute to claiming horses that provide the backbone of day-to-day racing programs at racetracks throughout the country.

Tom Albertrani-trained Fiya was in control throughout the five-furlong turf race for horses that started for a claiming price of $25,000 or lower in 2019-2020, scoring by 1 ½ lengths while providing jockey Luis Saez with his fifth of six victories on Saturday’s program.

“He really is an incredible turf horse, since we’ve seen him go from dirt to turf, he just does things so easily,” Albertrani said. “From the first day I got him in the barn, I fell in love with him. He got my attention right away and looked like a superstar.”

Fiya broke cleanly from his No. 1 post position and quickly opened a clear lead on the backstretch and was never threatened thereafter.

“He’s a special horse. When I rode him for the first time at Belmont, he showed me a lot of ability. I couldn’t wait to be on him today,” Saez said. “He broke from there fast and took the lead. I know he was rolling, but he loves to run. I just let him run into the stretch and he just took off by himself.”

Fiya, who ran five furlongs in 55.63 seconds, finished second and third on dirt in his first two career starts at Laurel, where he came back to break his maiden in his turf debut and  win an allowance race. Purchased for $400,000 during the July 2020 Wanamaker’s Online Auction and transferred to Albertrani, Fiya captured a Belmont allowance and the Maryland Million Turf Sprint at Laurel before capturing the Canterbury.

“Competition-wise for Claiming Crown, this was a good group of horses. He’s an impressive horse,” Albertrani said. “Every time he runs, he just seems to run better and better. I think we’ll give him a break now and bring him back later next year.”

Fully Loaded, who was closest in pursuit of Fiya throughout the race, finished second 1 ¼ lengths ahead of Harry’s Ontheloose.

A 5-year-old mare who won the Powder Break over this course in May, Jakarta provided trainer Mike Maker with his record 18th victory in the Claiming Crown.

“Claiming Crown is always a fun day, a little different without fans this year,” Maker said. “I was glad to do it with Jakarta. She’s been a great filly for us all year, so it’s very rewarding. She didn’t get away today as quick as she usually does, but her class prevailed.”

Jakarta raced third entering the turn behind the pacesetter My Sarasota Star before driving to the lead inside the final eighth. It was Jakarta’s eighth victory in 18 starts. The Distaff Dash was open to fillies and mares who had started for a claiming price of $25,000 less in 2019-20.

Jakarta, who returned $3.60, was 2 ¼ lengths in front of Unaquoi, who rallied from 10th for the place. Thinkin Cowtown was third.

Walder Racing’s Descente, claimed for $6,250 Oct. 18, drove past favored stablemate and defending champion Liza Star around the turn to win the $80,000 Glass Slipper by 3 ¾ lengths. Don’t Get Khozy was second and Sky Chaser third.

Trained by Peter Walder and ridden by Miguel Vasquez, Descente was rated in second behind Liza Star past an opening quarter in :23.58 before taking the lead around the turn past a :45.89 half mile. The 4-year-old daughter of Bodemeister was driven home from there and returned $9.20.

Spedale Family Racing LLC and Flying P Stable’s Queen Embrace, claimed out of her last race at Aqueduct for $80,000, provided jockey Luis Saez with his fifth winner of the day, closing from eighth to win the $95,000 Tiara by 2 ¾ lengths over favored Sugar Fix.

Queens Embrace covered the 1 1/16 mile turf course in 1:40.26. It was the 3-year-olds sixth win in 12 starts. The daughter of Real Solution broke her maiden at Tampa in January for a $16,000 claiming tag. The Tiara was open to fillies and mares who had started for a claiming price of $25,000 or less the last two years.