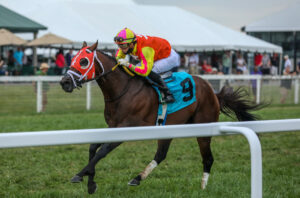 Ten Twenty Racing’s Max K. O. earned a berth in Saturday’s $95,000 Emerald by winning a Sept. 8 qualifying race at Kentucky Downs, which paid the $100 nominating fee and would have paid a shipping fee up to $1000 had the Saffie Joseph Jr. trainee been stabled anywhere other than Gulfstream Park.

The Emerald, a 1 1/16-mile turf race for 3-year-olds and up who have raced for a claiming price of $25,000 or less in 2020-2021, is one of nine starter stakes at Gulfstream in Saturday’s $810,000 Claiming Crown – an annual event that celebrates the blue-collar horses that support the day-to-day racing programs at racetracks across the country.

Created by the National Horsemen’s Benevolent and Protective Association in partnership with the Thoroughbred Owners and Breeders Association, the Claiming Crown rewards and pays tribute to the horses and horsemen that provide the foundation for day-to-day racing programs at tracks around the country.

In his first start for Joseph, the 5-year-old son of J P’s Gusto stepped up in a big way to miss winning the Mr. Steele Stakes by a nose to stablemate Renaisance Frolic, a graded stakes-placed multiple stakes winner.

“We claimed him for $25,000 because he was always in good form,” Joseph said. “We ran him in a stake. We were a bit ambitious, and he just got beat. After that we took him to Kentucky Downs for a Claiming Crown prep and he won that quite well.”

Max K. O. stalked the pace before kicking in through the long Kentucky Downs stretch to win by 2 ¾ lengths under Irad Ortiz Jr. Back at Gulfstream, where the turf course was undergoing renovation, the Florida-bred turf runner held a clear lead in the stretch before coming up just a neck short of holding off Louder Than Bombs in a starter allowance on Tapeta Oct. 28.

“Last time on Tapeta, he looked like he was home free and he just got nailed at the wire,” Joseph said. “My primary thought was: it was on Tapeta, and it was still early and it didn’t play to speed as much. I think that was against him. I know it’s an excuse, but I honestly believe it was valid excuse. The horse that beat him had more stamina. I hope back on the turf, he will run a big race.”

Attentive, a 5-year-old son of Power Broker was claimed for $40,000 out of his most recent start, a close-up third Nov. 7 at Belmont Park. The Last Zip finished four lengths behind Max K.O. in Kentucky Downs’ Emerald qualifier two starts back. Chantal Sutherland has the mount on Attentive, while Jorge Vargas Jr. has been named to ride The Last Zip.

Sandra New’s Louder Than Bombs will clash again with Max K.O. in the Emerald. The David Fawkes-trained 5-year-old had rallied to win a $20,000 claiming race on turf prior to his victory over the Joseph trainer on Tapeta. Emisael Jaramillo will once again be aboard the son of Violence.

Monarch Stable Inc.’s Light Fury, who has won starter allowances on turf and Tapeta while finishing in the money in his last six starts; Bruno Schickedanz’s Mandate, who captured the Artie Schiller takes at Aqueduct at 44-1 last time out; Dotson Stable LLC’s Benelux, who won back-to-back optional claiming allowances at Arlington prior to an off-the-board finish at Keeneland; Mob Stables LLC’s Clear Vision, claimed for $25,000 out of a dominating victory at Belmont last time out; Patricia Generazio’s Mid Day Image, who is coming off back-to-back starter handicap wins at Monmouth; and David Melin, Laurie Plesa and Leon Ellman’s Vow Me Now, a stakes-winning son of Broken Vow trained by Eddie Plesa Jr.; are also entered in the Emerald.