Multiple graded-stakes winner Starship Jubilee can pay immediate dividends for her new connections when she returns to her favorite track for Saturday’s $125,000 Tiara on Opening Day of Gulfstream Park’s 2018-19 Championship Meet. 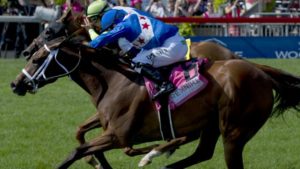 Starship Jubilee had run for Soli Mehta and Woodbine-based trainer Kevin Attard since being claimed for $16,000 by Attard’s father, Tino, in February 2017 at Gulfstream. The 5-year-old Indy Wind mare won her first five starts following the claim, including the Nassau (G2) and Dance Smartly (G2) at Woodbine, and earned the Sovereign Award as Canada’s champion turf female.

A winner of eight of 15 starts with a second in two thirds for Attard and Mehta, Starship Jubilee was offered on opening day of Keeneland’s November Breeding Stock Sale Nov. 5 following her fourth-place finish in the 1 ¼-mile E.P. Taylor (G1) at Woodbine. She failed to meet her $425,000 reserve and was later sold privately to Bonnie Baskin’s Blue Heaven Farm.

“They’ll be campaigning her in this race and then in 2019,” Attard said. “We left her in Kentucky and training at Margaux Farm and she’s been working well. Hopefully, she’ll come with her best foot on Saturday.

“It’s definitely bittersweet. She’s been really good to us,” he added. “When we first claimed her way back we were just hoping to find a good horse to bring back to Woodbine, but she’s provided us with so much more. I just can’t say enough about her. I’m just lucky and fortunate that they have given me the opportunity to continue to train her and I appreciate that. I’m looking forward to hopefully another year of some good running with her.”

Starship Jubilee ended her 2017 campaign in the Tiara, where she took a two-length lead into the stretch but was outkicked late to finish third, beaten a length as the favorite by Martini Glass and Peru, who hit the wire a nose apart. Before she left Florida, she won the Sunshine Millions Filly & Mare Turf and was second in the Mary Todd, improving her lifetime record at Gulfstream to seven wins from 14 races, with two seconds and a third.

“She’s like a snowbird I guess now, right? She heads south for the winter, loves it there, and then comes back up to Woodbine in April and doesn’t mind the summers up here,” Attard said. “I’m not sure she handled the course [in last year’s Tiara]. It was kind of deep and tiring and I don’t think she appreciated it. I think it hindered her a little bit so, hopefully, we’ll have a nice firm turf for her on Saturday.”

After returning to Woodbine, Starship Jubilee was off the board in defense of her graded-stakes wins but won a starter event going 1 1/16 miles before cruising by 3 ¼ lengths in the Canadian (G2) prior to the E.P. Taylor Oct. 13, where she was only beaten 1 ½ lengths.

“It’s been a pretty good year. When we got back from Gulfstream we kind of freshened her up a little bit on the farm and just couldn’t get her right for a couple starts,” Attard said. “We had her in a couple spots and she won and got her confidence back and she came up with a big race in the Canadian to win pretty convincingly. She ran a pretty good race in the E.P. Taylor, as well, at a mile and a quarter which might be beyond her best.”

Starship Jubilee will break from outside Post 12 in the Tiara, with Paco Lopez aboard at 122 pounds, two less than topweight Valedictorian.

“To be honest with you, I think arguably her last two races are probably her best races of her career,” Attard said. “She looked like she was on a little bit of an upward trend and running the best races of her life, I thought. She’s had a couple of good breezes at Margaux Farm and is ready to go.”

Epic Racing’s Valedictorian enters the Tiara off back-to-back wins, the most recent coming in the 1 1/16-mile All Along Stakes over a yielding turf at Laurel Park Sept. 22. She has won each of her last three grass starts, including the one-mile Jersey Girl Stakes July 4 at Monmouth Park.

Davie, Fla. native Tyler Gaffalione, fresh off riding titles at Keeneland and Churchill Downs this fall, has the call on Valedictorian from Post 9.

Mike Maker, the Claiming Crown’s all-time leading trainer with 16 wins including the 2012 and 2014 Tiara, brings Ken and Sarah Ramsey’s Peru back for another try. The Ramseys lead all owners with 15 Claiming Crown victories, all but one of them trained by Maker.

The 5-year-old Peru has two wins and three seconds from eight starts in 2018, taking a one-mile, 70-yard starter over the Kentucky Downs turf Sept. 12 before finishing second in an open, second-level allowance going 1 ½ miles Oct. 20 at Keeneland.

“She’s been holding her form all year. She’s had a couple tough beats but other than that I’ve been very pleased with her,” Maker said. “She’s kept some good company. I think she’s been pretty honest. She’s come from way out of it and she’s laid close her last couple. She’s very tactical.”

In last year’s Tiara, Peru raced far back for a half-mile before getting into contention and coming with a run only to fall a nose short under Julien Leparoux, who returns to ride from Post 1. The Tiara will be the second Claiming Crown race run over the Gulfstream turf, which underwent a $1 million renovation this fall.

“She lost a tough photo in this race last year, and I think if she runs that race back she’ll be tough. She came from way back that day and she just didn’t get there,” Maker said. “She’s run well over the track even though it’s a new surface. We look forward to her running another big one.”

Completing the Tiara field are She’s So Fine, Drinks On Me, Vendita, You Cheated, Queen Jill, Spicy Nelly, So Innocent, Mauras Forever and Truth in the Lies.