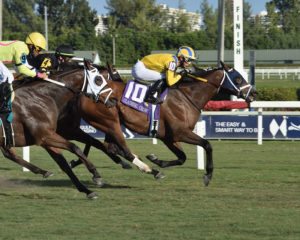 GenStar Thoroughbreds’ High Noon Rider, having spent the summer and early fall on the road, returned home to register the biggest win of his 55-race career with a shocking 50-1 upset of the $95,000 Claiming Crown Emerald Saturday at Gulfstream Park.

This marked the ninth straight year at Gulfstream and 22nd overall for the Claiming Crown, created in 1999 to celebrate the blue-collar horses that are the foundation of the racing industry nationwide.

It was the first career Claiming Crown victory for trainer Saffie Joseph Jr. The runner-up, 2-1 favorite Temple, was one of five horses in the field trained by Mike Maker, the event’s all-time leader with 18 wins including seven in the Emerald.

“We’re just thankful,” Joseph said. “We’ve claimed horses that won graded-stakes, but had never won a Claiming Crown race. It’s good to get it done finally. He’s a cool, old horse. To be honest, I didn’t think he was coming in at his best so the confidence wasn’t there. We’re thankful and blessed. He stepped up and ran the race of his life today.”

Jockey Edgard Zayas settled High Noon Rider well behind Grade 3-winning stablemate Tusk, racing for the first time in 11 months, who posted fractions of 25.10 and 48.77 seconds pressed by Maker-trained Hieroglyphics and Over the Channel three wide. Hierolyphics assumed the top spot on the turn and went six furlongs in 1:11.74 with Over the Channel poised to strike, but Zayas worked his way outside and High Noon Rider powered through the stretch once in the clear.

“Saffie told me before the race this horse had a really good kick on him,” Saffie said. “Once on the turn, I cut the corner and I was following Temple through the corner. I knew Tyler had a lot of horse and he was the horse to follow, really. I was just trying to save enough until I got into the stretch and once he got into the clear he kicked on really hard from there.”

It was the sixth win with one second and one third from 10 lifetime tries at Gulfstream for High Noon Rider, an 8-year-old Distorted Humor gelding whose last victory came in a 1 1/8-mile optional claimer June 28 over the course. The victory pushed his career bankroll over the $600,000 mark.

“He’s just a horse for course, honestly. If you see his numbers before he left Gulfstream this year, they were good. Then we got ambitious. We went all around with him and he kind of lost his way. Today, he ran back his best race,” Joseph said. “I got so excited jumping up, my chest was hurting me after. Edgard gave him a dream trip, saved every kind of ground and got him out when he needed to.”

Krsto Skye, second in September in the Smile Sprint (G3) and third last time out in the De Francis (G3), led gate-to-wire under jockey Irad Ortiz Jr. to win the $75,000 Express, covering six furlongs in 1:10.14.

Owned by Daniel Feit and Carlos David and trained David, Krsto Skye broke from the rail and set fractions of :22.35 and :45 before driving home 1 1/4 lengths in front of Whyruawesome. for his 14th victory in 61 starts. David claimed the 8-year-old gelding in February for $16,000 out of a five furlong turf race at Gulfstream.

For Ortiz, it was his first win of the Championship Meet. He is the two-time defending riding champion.

“It feels great to be back at Gulfstream,” Ortiz said. “It feels great to have the support from the owners and trainers here. This is a nice horse. Carlos told me to let him do his thing in you can control the pace from the inside post. He put me in a good position, so I just held it there and when it was time to go he responded very well.”

For horses who have started for an $8,000 claiming price at any time during their careers.

Avant Garde Gets Up in Time for Rapid Transit Win

Gelfenstein Farm LLC’s Avant Garde, a 3-year-old gelded son of Tonalist, drove up the rail under jockey Leonel Reyes to win the $85,000 Rapid Transit by a half-length over Town Classic.

Trained by Jesus Lander, Avant Garde’s only loss was a fourth-place finish Sept. 27 in the Oklahoma Derby (G3). Lander claimed Avant Garde from a second-place finish June 10 at Gulfstream for $10,000.

Avant Garde broke second to last but was moved up quickly to fourth by Reyes down the backstretch while Fix Me a Sandwich was taking the field through the opening quarter in :22.14. Entering the stretch, Town Classic took the lead after moving three-wide around the turn, but Reyes and Avant Garde drove to the front in the final 50 yards along the rail for the win, covering seven furlongs in 1:21.98.

The Rapid Transit was open to horses who had started for a claiming price of $16,000 or less over the last two years.

Frost or Frippery, a 7-year-old gelding trained by Brad Cox, shipped in from Kentucky to win the $75,000 Iron Horse over a late-closing Bobby G. The victory was jockey Luis Saez’s sixth of the afternoon. The victory for the son of Lewis Michael was No. 21. The gelding has now placed first, second or third in 46 of 66 career starts.

The Iron Horse was open to horses who had started for $8,000 or less during their careers.