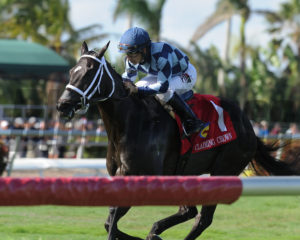 Led by multiple stakes winner Blue Bahia, trainer Jason Servis will have major players in three of the four turf races on tap Saturday as part of the $1.11 million Claiming Crown on Opening Day of the 2018-19 Championship Meet at Gulfstream Park.

Defending champion Blue Bahia is entered to end a five-month break between races in the $110,000 Distaff Dash, a five-furlong sprint for fillies and mares 3 and older that will kick off the turf stakes action on an 11-race program that begins at 11:50 a.m.

Servis will also send out Grade 2-placed Dowse’s Beach in place of Breeders’ Cup Turf Sprint (G1) runner-up World of Trouble in the $110,000 Canterbury at five furlongs and Group 3 winner Montclair in the $125,000 Emerald at 1 1/16 miles, both for 3-year-olds and up.

Servis has been targeting the Distaff Dash for Blue Bahia, unraced since finishing second as the favorite in the Turf Amazon July 7 at Parx. The 5-year-old Wildcat Heir mare is seven-for-12 at the distance and three-for-six over Gulfstream’s turf course, which this fall has undergone a $1 million renovation.

“She had some issues this summer, nothing major. I know the filly and I know if you don’t wait she’ll make you wait, so we gave her some time,” Servis said. “She’s been back breezing good and I’m looking forward to getting her back. She loves the track and she loves the distance.”

Blue Bahia was claimed away from Servis for $25,000 in March 2017 at Gulfstream, but the trainer got her back in her subsequent start for $30,000. Since then she has won three stakes, pulling away by 2 ¾ lengths in last year’s Distaff Dash under Paco Lopez, who returns to ride from Post 3 in a field of nine.

Six weeks after being pulled up in the stretch of the Ladies’ Turf Sprint on the undercard of the $16 million Pegasus World Cup Invitational (G1), Blue Bahia came from off the pace to conquer the Captiva Island in her last start before the Turf Amazon.

“She was training good going into this race last year. If you watch the rerun from Pegasus Day, she was going to the front in hand at the sixteenth pole and stumbled real bad,” Servis said. “We all thought she broke down when Paco pulled her up, then she came back and won. She’s a nice filly.”

Michael Dubb, a part-owner in World of Trouble, also owns 7-year-old Dowse’s Beach, who enters the Canterbury in the best form of his life. The Disco Rico gelding owns three straight front-running victories going 5 ½, seven and six furlongs, all over less than firm surfaces, since being claimed for $40,000 in August. His combined margin of victory is 12 ¼ lengths.

The Canterbury will be the 34th career start for Dowse’s Beach and fifth in stakes company. The other four came in succession last summer and fall, including second by a neck in the seven-furlong Play the King (G2) over the turf at Woodbine.

“We actually got outshook for him last year when Brad Cox outshook me for him, and Brad did well with him. We kind of had our eye on him and ended up getting him and the horse has been as good as we thought he would be,” Servis said. “I’m looking forward to running him. He doesn’t have to be on the lead. He used to come from last, off the pace. He can be anywhere, that horse.”

Mike Maker, the Claiming Crown’s all-time leading trainer with 16 wins, will send out Three Diamonds Farm’s Maniacal, a gelded 5-year-old son of Kitten’s Joy that has gone winless in four starts, the last two on dirt, since being claimed for $62,500 in July at Saratoga. In stakes company he was third by a half-length in the Kentucky Downs Preview Turf Sprint Aug. 5 and sixth in the Vosburgh (G1) Sept. 29 at Belmont.

“He’s a Kitten’s Joy speedball. He ran on the dirt his last couple races and I don’t think it’s his best surface so we’re looking to get back on the turf with him,” Maker said. “He got softer ground at Kentucky Downs that’s not to his liking so a little firmer ground is what we’re looking for with him. I’d like to stretch him out at some point if the opportunity comes about.”

Servis entered Mr. Amore Stable’s Montclair in the Emerald off four straight come-from-behind wins, each by widening lengths, the most recent an 11 ¾-length romp in a 1 1/16-mile starter event over the soft going at The Meadowlands – where Servis claimed the 8-year-old gelding last fall for $5,000 on behalf of Mr. Amore’s Ron Lombardi.

Bred in Ireland, Montclair was a Group 3 winner in France at 4 and has placed in three stakes in the U.S. including second in the two-mile H. Allen Jerkens in 2016 at Gulfstream. In February, he was a nose winner of the one-mile Little Magician at Gulfstream but disqualified to second for interference.

“The day Firenze Fire won the Champagne, Ron said, ‘C’mon we’re going to The Meadowlands to look at a horse,’” Servis said. “The horse really did have a lot of back class, so we took a shot and he’s been a good horse for us, he really has. I like the old horses. When I got him it took me a while to kind of get him figured out … but just over the course of a year it’s really kind of gotten him into a groove and I’m real happy with him.”

Maker will counter with the pair of Slim Shadey and Souperfast. Michael Hui’s Slim Shadey is a 10-year-old gelding that has won 14 races and nearly $1.3 million in purse earnings but has been off the board in two tries since being claimed from Servis for $62,500 this summer.

“He’s an old, classy, cool horse that been around a long time and had success just about wherever he’s gone,” Maker said. “We claimed him the race after Justify won the Belmont. He didn’t have the greatest trip at Keeneland last time but he was in against a very deep field so we expect this class to be more to his liking.”

Skychai Racing’s Souperfast was claimed out of a third-place effort, beaten a length, in his last start going 1 1/16 miles on the Belmont Park turf Oct. 19. It was the sixth time changing hands since last summer for the 7-year-old gelding that owns seven career wins.

“He’s just a consistent old timer who runs his race every time,” Maker said. “I don’t expect anything different from him on Saturday.”

The Emerald, which precedes the richest race on the program, the $200,000 Claiming Crown Jewel, drew an overflow field of 16 including stakes winners Aquaphobia, Durocher and Salute the Colonel; Birdsnest Party, Lucky Ramsey, Bold Rally, Your Only Man, Driven by Thunder, Love Conquers, Uncle B, Who’s Your Drama and also-eligibles Barney Rebel and Grand Nenuco.