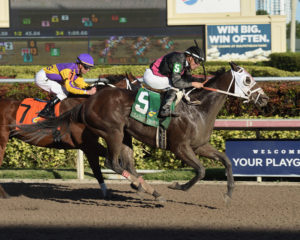 Mark Moshe’s Cautious Giant will seek a repeat victory in Saturday’s $110,000 Rapid Transit, one of nine starter stakes in the nine-race $1.1 million Claiming Crown on opening day of the 2018-2019 Championship Meet at Gulfstream Park.

One of five defending Claiming Crown champions, Cautious Giant closed from off the pace to score by a length last year in the seven-furlong sprint for horses that started for a claiming price of $16,000 or lower.

“He’s training the same as he was going into the race last year,” trainer Victor Barboza Jr. said.

Claimed for $16,000 out of a second-place finish at Gulfstream Sept. 24, 2017, the 7-year-old gelding has finished in the money in all 10 of his starts for his new connections, including four victories and five second-place finishes.

The son of Giant’s Causeway most recently won the Trinniberg Stakes at Gulfstream Sept. 8.

“He has trained very good since he won the Trinniberg,” Barboza said. “The horse is in very good condition.”

Emisael Jaramillo has the return mount aboard Cautious Giant in the Rapid Transit, which has been carded as the second race and will kick off the Claiming Crown action on Gulfstream’s 11-race program (11:50 a.m. first-race post time).

Trainer Jorge Navarro entered four horses – Sal the Turtle, Chunnel, Magnifier and Nominal Dollars – in the Rapid Transit in an effort to upend the defending champion.

Joseph Besecker’s Sal the Turtle has won both starts since being claimed at Saratoga Aug. 27.

Flying P Stable’s Magnifier has won his last two races at Delaware Park by a combined 18 lengths in front-running fashion.

“We ran him for $7,500 to make him eligible for the Claiming Crown,” Navarro said. “I thought he had potential. He came back and won a one-other-than.”

Final Turn Racing Stable’s Chunnel has won two of his last three starts, including a triumph in Charles Hesse III Handicap at Monmouth; Monster Racing Stable’s Nominal Dollars is set to make his first start for Navarro after being claiming out of a second-place finish for $10,000.

Miguel Vazquez has been named to ride Sal the Turtle; Paco Lopez has the mount aboard Magnifer; Nik Juarez and Chris Landeros will ride Chunnel and Nominal Dollars, respectively.

Loooch Racing Stables’ Uno Mas Modelo, a winner of four of his last five starts, enters the Rapid Transit off a victory in the Bet On Sunshine Stakes at Churchill Downs. Albin Jimenez has the return mount aboard the Anthony Quartarolo-trained 5-year-old gelding.

Cautious Giant will be joined by four other defending champions – Starship Jubilee (Tiara), Blue Bahia (Distaff Dash), First Growth (Express), and Twocubanbrothersu (Iron Horse) – for Saturday’s Claiming Crown, a tribute to the endurance and resilience of the claiming horse.

Stephan Devaney and trainer John Rigattieri’s Twocubanbrothersu, an 8-year-old gelding with more than $400,000 in earnings, has registered 23 career victories, including a triumph in last year’s $110,000 Iron Horse. The son of Harlington, who finished second in the 2015 Iron Horse, will face 13 rivals in the 1 1/16-mile stakes for horses that have started for a claiming price of $8,000 or lower.

Twocubanbrothersu, who was claimed for $6,250 in 2014, led throughout the running of the 2017 Iron Horse on his way to a 1 ½-length triumph. He enters this year’s Iron Horse on a rare three-race losing streak, his most recent effort being a tiring fifth-place finish in the Governor’s Day Handicap at Delaware.

Navarro is scheduled to saddle three horses – Guns of Steel, Donji and Salsa’s Return – for the Iron Horse.

Final Turn Racing Stable’s Guns of Steel will make his first start for Navarro after being claimed for $25,000 out of a second-place finish in an optional claiming allowance at Parx Sept. 13.

Emisael Jaramillo has the mount on the 6-year-old son of First Defence.
Quenane, Double Whammy, To Dare, Lewis Vale, Pat’s Shoes, Cheech Thunder, Moon Gate Warrior, Yes I See and Spirit Love round out the field.

Michelle Winters’ First Growth, who has won 10 of 30 starts, is coming off a 2 ½-length allowance victory at Thistledown for his title defense in the $110,000 Claiming Crown Express. The Odin Londono Jr.-trained 6-year-old gelding prevailed by 3 ½ lengths in the 2017 running of the six-furlong stakes for horses that have started for a $8,000 claiming price or lower.
First Growth went on to finish second, beaten by only a half=length by X Y Jet, in the Mr. Prospector (G3) in his next start.

Gerardo Corrales has the return mount.

Jon Marshall’s Appealing Future, who became eligible for the Express while winning a $5,000 claiming race at Delaware Park in Aug. 2017, has won three of his last four starts at Parx and Suffolk Downs. The John Servis-trained son of Successful Appeal is enjoying the best season of his career, winning five of 11 starts and more than $185,000 in purses.

Two horses have shipped from Turf Paradise for the Express – Leadem in Ken and Creative Art. The former, an 8-year-old son of Sky Mesa, has won 14 of 38 starts and more than $400,000 in purses. Leadem In Ken most recently lost a photo finish in the Luke Kruytbosch Stakes at Turf Paradise.

Creative Art, a winner of 19 races and more than $425,000 in purses, is coming off an optional claiming allowance race.